Since 2010 production, sale and use of synthetic psychostimulants (including Spice and Mephedrone) like any other narcotics is illegal all around the world.  Violation the law may result in criminal persecution.

Spice is a synthetic cannabis. It is a psychoactive substance which has the same effects as a herbal cannabis. The product appeared on the market in the early 2000s and it was presented as a mixture of legal herbs for smoking. Spice was sold as “herbal incense” product. (the manufacturer “Psyche Deli”, UK) However, the laboratory analysis conducted by research centers in Germany in 2008 showed that all Spice blends had nothing to do with the herbs pointed as ingredients, but in fact they all contained synthetic cannabioids kind of tocopherol which work on body in similar way as natural THC. 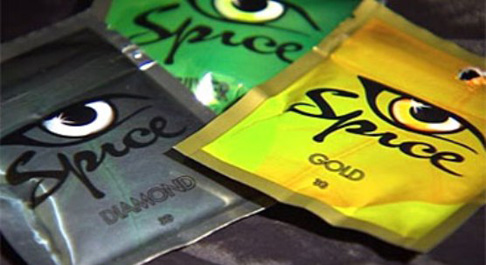 illegal. The product has actively been sold under different brands on line, in shops and at petrol stations in  Europe and North America.. The main point of this hoax was that stuff had absolutely the same effects on body as THC, but didn't show positive results in drug tests for THC. In other words Spice was a fake pot.

The EMCDDA  (European Monitoring Center for Drugs and Drug Addiction) reported  in 2009 that ‘Spice’ products were for sale in 21 European countries.

Though the main symptoms of Spice and THC intoxication are very similar,  there is a slight difference between them, such as increased agitation and nausea which are more typical for intoxication from of synthetic cannabioids.

Usually people who get used to smoking Spice start showing up  the symptoms of withdrawal after 3 months of regular use. 3 grams of Spice Gold  per day during several months  make a person meet all criteria of addiction: obsessive thoughts about drug, growing tolerance, abstinent syndrome,  uncontrollable desire to use again despite full awareness of all physical, mental and social negative consequences of drug use.

Mephedrone is a synthetic psychostimulant from amphetamine class.  Mepedrone was synthesised in 1929, but was out of practical use until 2003 when it was “rediscovered' by underground chemist and drug addict known by nickname “Kinetic”.  And four years after the drug was available for sale on internet. Mepherdrone is entactogen drug  and can be used only for recreational purpose. It has  similar effects to those of MDMA, amphetamines  and cocaine. Due to the fact that  Mephedrone wasn't registered as illegal drug until 2010 and was freely available, it quickly obtained popularity among drug users and became wide spread drug all around the world, especially in Sweden and UK.

The main  manufacturer of Mephedrone is China. The drug is available in the form of tablets or a powder and can be can swallowed, snorted or injected.

Intended effects of Mephedrone are: euphoria, elevated mood, excitement, improved mental function, the urge to talk, alertness, restlessness, openness, decreased hostility, mild sex stimulation. The effects last for between two and three hours when taken orally or nasally, but only half an hour if taken intravenously.  According to survey conducted in UK, users who had previously used cocaine, reported that Mephedrone  produced a better quality and longer lasting  effects than those of cocaine with the same risks of possible complications.

Like any other psychostimulants Mephedrone causes  various unintended side effects including: delusions, hallucinations, poor concentration, poor short-term memory, teeth grinding, erratic behaviour, dilated pupils. The most severe effects like paranoia, severe panic attacks, depression are linked with the high doses and prolonged usage. The other common side effects of mephedrone include hyperhidrosis (excessive sweating), changes in body temperature, headache, increased heart rate, breathing difficulties, loss of appetite, discolouration of extremeties (blue and cold fingers).  Snorting of mephedrone may result in nose bleeds, and nose burns.  Overusing Mephedrone for a few days  result in sleep deprivation for the next few nights.

Mephedrone  is a very dangerous drug. We have observed  a patient who used the drug only for 2 months. He lost 8 kg and took on an entirely different personality, became depressed, confused, aggressive, presented symptoms of withdrawal from reality, impotence and indigestive disorders.