The most common primary ecstasy side effects reported by users (according to NIDA -National Institute on Drug Abuse. USA) include:

Once the acute ecstasy effects have worn off,  the phase of comedown shows up.  “After effects” /or “rebound effects” characterized for this phase can be explained by deficit of serotonin in the brain after its excessive use in the first stage.  After effects  typically  last up to 5-7 days, with the exception of depression, which often becomes chronic.

After effects (according to NIDA) include: 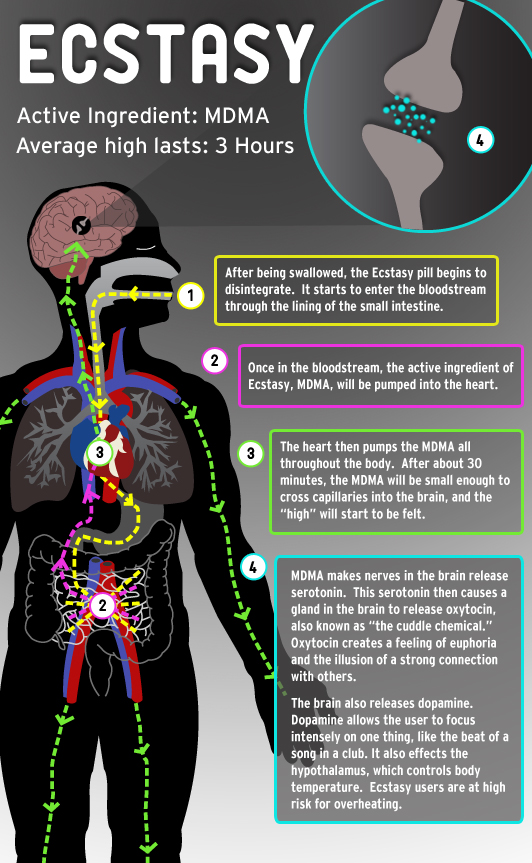 In case of overdose or altered individual sensitivity to MDMA potentially dangerous stimulant psychosis (or hyper-serotonin syndrome) comes out, the symptoms of which are the following (according to NIDA):

CHRONIC USE AND DAMAGING EFFECTS OF ECSTASY ON THE BRAIN 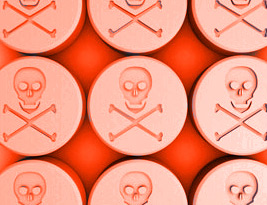 The biggest concern about effects of ecstasy, as it has been shown in numerous research in primates, is that ecstasy (MDMA) actually kills neurons which produce serotonin. As it was mentioned above serotonin is a vital neurotransmitter. People who chronically experience insufficient amounts of serotonin in the brain present a variety of behavioral and psychological problems, including, but not limited to, depression, confusion, self-destructiveness, chronic fatigue, mood swings, violence, irritability, aggression,  sleep problems, drug craving, severe anxiety. These problems can occur soon after taking the drug or, sometimes, even days or weeks after taking MDMA (ecstasy).

Reviews of  on memory research show that 70–80% of MDMA (ecstasy) users suffer significant short-term and long-term memory impairment. Although some of these effects of ecstasy may be due to the use of other drugs in combination with MDMA.

Research in nonhuman primates showed that exposure to MDMA for only 4 days caused damage to serotonin production that was still evident for few years later.

MDMA is a neurotoxic substance and its consumption sooner or later inevitably leads to detrimental, sometimes irreversible  changes in human brain.