Methylenedioxymethamphetamine (MDMA) is a synthetic, psychoactive drug better known by its common street name Ecstasy. It is an illicit drug that typically available in either table or powder form. Notably, use of MDMA is wide-spread and very popular due to its  entactogenic (state of feeling positive about both oneself and the world) properties. Ecstasy belongs to amphetamine class of drugs and chemically is similar to the stimulant methamphetamine and the hallucinogen mescaline. The stimulant effects of ecstasy include feelings of improved energy, euphoria, increased arousal, insomnia, distortions in time, emotional warmth, kind of social distortion and diminished anxiety, altered perception and tactile experiences. hypertension, anorexia (appetite loss), increased perspiration, among others.

Ecstasy had a medical application as a treatment for some types of depression until 1985. Since 1985 MDMA is an illicit substance in most countries. It means that its possession, production or sale may result in criminal prosecution. Ecstasy is one of the most widely used recreational drugs all over  the world.  It is commonly associated with dance parties (or "raves") and electronic dance music.

A long term survey of MDMA users has shown that more than half of those who reported usage met the diagnostic criteria for addiction: 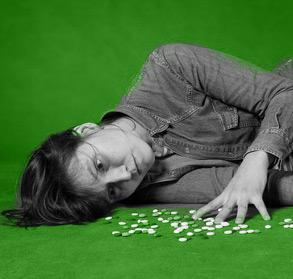 Continued use of the substance despite awareness of physical or psychological detriment withdrawal effects (abstinence syndrome).

MDMA exerts its primary effects  through excessive release of serotonin from the neurons in the brain and thus accelerates  transmission of electrical signals between neurons.

Serotonin is a chemical neurotransmitter which provides inter-neuron communication and plays an essential role in all information-exchange processes in human brain.

The serotonin system along with other neurotransmitter systems takes part  in mood regulation, sexual activity, sleep, and sensitivity to pain.

Ecstasy (MDMA ) also has similar effects on another neurotransmitter—noradrenaline, which  increases  heart rate and blood pressure.

Ecstasy is taken orally.  It is particularly popular among adolescents, young adults and urban gay societies. Some reports indicate use of MDMA (ecstasy) as part of a multiple-drug experience that includes marijuana, cocaine, methamphetamine, LSD, psilocybin, cialis and other legal and illegal substances. Usually the primary ecstasy effects start within 40-50 minutes of consumption, reaching maximum at approximately 1.5 hours, last  about 2.5-3 hours and then go down for a few hours accompanied by rebound ecstasy effects (after effects).