Marijuana - Ways of use marijuana

Ways of use marijuana

The main psychoactive effects of marijuana is  the result of the impact of the drug on neurotransmitters. 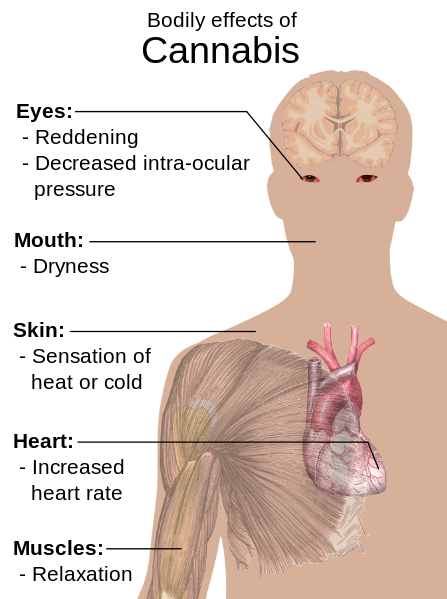 The most studies in this field are  focused on the effects of marijuana on the chemical neurotransmitter called acetylcholine. THC in relatively small doses  reduces methabolism of acetylcholine, particularly in hippocampus area, which leads  to  decreased activity of this neurotransmitter. Besides, THC promotes  release of another neurotransmitter - serotonin. The latest discovery of the THC receptors of the brain opened the new opportunities for exploring  brain path ways  involved in the actions of cannabinoids and  searching  for the  chemical substances produced by the body which interact with the cannabioid receptors. Later, a group of scientists discovered the presence of natural chemicals in the body called anandamides (from the word "bliss" in Sanskrit) that operate on the same receptors of the brain  as cannabinoids and take part in processes of pain and mood regulations.

Physical cannabis dependence is very rare. In accordance with the data, any significant withdrawal syndrome was not observed. There are no indications for abstinence syndrome, which is the case for other substances such as alcohol or heroin. Aspects of cannabis dependence in case of long-term abuse primarily manifest in  such symptoms as sleep disorders, nausea, irritability and restlessness. Some experts argue that these symptoms are more related to psychological dependence. Nevertheless, physical dependence is not obvious. Existing cases of physical withdrawal are related to very high doses of marijuana taken over long period of time. However, some people really get physically  dependent on marijuana, and the mechanism of this relationship remains unclear.

Side effects of marijuana - Nausea and vomiting

Cannabis and synthetic THC are often used to prevent nausea and vomiting caused by chemotherapy and radiation therapy to treat cancer. These side effects of marihuana may last from several hours to several days and  often cant be alleviated by traditional antiemetic drugs.
Systematic studies of the antiemetic effects of THC started in 1970 after the stories of the patients  who reported that their own use of marijuana helped them  to alleviate the side effects of chemotherapy.