Drugs taken in combination potentiate the narcotic effects of each other.  Their addictiveness, narcotic properties  and toxic effects on the body arise. Withdrawal symptoms become more severe and prolonged. The  pathological attraction to drugs (craving) reaches the point of paranoia. The processes of physical and mental degradation are  accelerated by several times. Detrimental health consequences of multiple drug addiction become irreversible after 3-4 years of drug abuse. This fact is confirmed by numerous studies and world wide medical practice over the past 30 years.

Combination of cocaine and alcohol 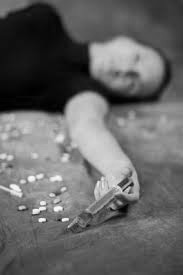 The most common and highly dangerous version of multiple drug addiction  nowadays is a combination of alcohol and Cocaine. The combination of Cocaine and alcohol in body creates a highly toxic chemical called Cocaethylene – the only known example of creating  a third drug following the ingestion of two others. Cocaethylene's powerful euphoric effects  help to explain the increasing attraction of combining alcohol and cocaine.  The combined use of alcohol and cocaine can produce a sense of increased and prolonged euphoria, compared with the use of either substance isolated. However, Cocaethylene has not only a pronounced euphoric effect but also possesses the life-threatening properties. It is not only toxic for liver, but it is also blamed for heart attacks and in a surge of social problems. Many who consider themselves social users – for whom a line or two of cocaine coupled with a few drinks in a bar  is a weekly or monthly event – don't consider the health implications of drug addiction. Its side-effects  threaten to become tragically familiar as they take their toll on users. Last year's survey conducted in UK revealed that there is a 20% increase in the number of young people (from 16 to 24-year old) taking the drugs every year. The number of people under 25 who have sought help for cocaine addiction has doubled in the past four years. Figures reveal that the number of people going to hospital after overdosing on cocaine has doubled over the past five years.  Alcohol plays a significant part in many of these admissions. Cocaine-related deaths are also increasing in the US. The US National Household Drug Survey estimates  that around five million people use alcohol and cocaine each month. The ability of cocaine users to consume vast amounts of alcohol is being blamed for an increase in sexually risky behavior among the young and rising levels of violence.  Studies in Manchester (UK) suggest that around half of all young people arrested for violent behavior were on drugs, and of these the majority were on cocaine. Many of them were drunk prior to their arrest. There is no question that the use of both alcohol and cocaine is a growing concern. Surveys show people who drink regularly in bars and clubs are more likely to be using alcohol and drugs. This presents challenges to health professionals about how to raise awareness of the health risks.

Another wide spread drug combination is the so called Speedball, when heroin and cocaine ate taken together intravenously in the same syringe or by insulation. Originally the term Speedball was applied only to combination of heroin and cocaine. Nowadays it also can be applied  to mixture of any opioids with amphetamines and bezodiazepines. The idea of Speedball is the use of stimulant (Cocaine) and depressant (Heroin) at a time. Combination of “upper” and “downer”  is meant to reach the more intense rush of euphoria and the same time to alleviate the negative side-effects of both drugs such as an excessive anxiety and depression.  Avoidance the sedative effect of heroin is the most frequent cause of appeal to Speedball.  Two substances with opposite effects cause a state of mediator chaos in user's brain.  Incoherence, confusion, drowsiness, blurred vision, motor skills dysfunction, uncontrolled behavior, paranoid delusions, hallucinations, excessive arousal are the typical symptoms of speedball intoxication.   There are two main groups of complications from using the Speedball.  The first one comes from cardiovascular toxic effects of Cocaine: irregular heartbeat, blood hypertension, vascular constriction  which often result in heart attack/ heart arrest, brain hemorrhage or ischemic stroke. The second one comes from  pharmacodynamics of the drugs. The effects of cocaine wear off far faster than those of heroin. Uncovered, isolated effects of heroin may result in sever respiratory depression which is a life threatening  condition.

This cocktail of drugs creates a strong physical dependence with all classical symptoms of heroin deprivation (nervousness, sickness, sever muscle pain, vomiting, diarrhea, sweating and etc.) strengthened by symptoms of cocaine withdrawal (insomnia, paranoia, anxiety, restlessness and etc.),  lasting even in the case of medical assistance no less than two weeks.

“Upper and a downer” combination can be called a “Speedball Death”.

There is a list of death from Combined Drug Intoxication (CDI) including  the deaths from  speedball complications: