One of the main criteria of any addiction is a growing tolerance. The constant need to consume the  psychoactive substances in growing doses to feed the addiction eventually makes a person physically and emotionally exhausted. Even the highest doses of dope don’t cause the former pleasurable effect any more. The need to use drugs regularly becomes required just to feel normal and avoid the withdrawal syndrome. Usually at this point,  the man realizes that drugs are not so sweet and safe, that he spends too much money on them, he neglects family and work, and he has to stop using. But then the problem of overcoming the drug withdrawal is emerging. The substance "holds" a man tightly.  Abrupt cessation of the drug use causes very distressful situation, making a person go through the painful  symptoms of physical and psychological withdrawal..  Often these symptoms are so unbearable, that cope with  them without medical help is impossible. Drug detoxification in this case is a useful tool to solve the problem.

Drug Detoxification is a complex of measures, directed to relieve the body from narcotics and provide an adequate protection from potentially dangerous and extremely unpleasant symptoms of withdrawal syndrome.
There are many various drug detoxification protocols  from opioids, sedativov, alcohol, stimulants and their combinations.  These are the  criteria according to we build a program of drug detoxification.

Drug Detox must be:

Nowadays the following methods of heroin detoxification, methadone, opium and other derivatives of morphine are known:

2. Rapid and Ultra Rapid Opioid Detoxification (UROD). The method means an accelerated release of opioid-receptors of the brain  from opioids by use of opioid  antagonists:  naloxone or naltrexone. In fact, detoxification lasts only a few hours  under  deep brain protection in form of total anesthesia. The patient doesn’t feel any withdrawal symptoms during the procedure. The possible remains of withdrawal symptoms after procedure are greatly reduced  and can be easily alleviated with the help of regular painkillers. Immediate implantation of Naltrexone is possible.

3. N.E.T. therapy. At the end of the 90s the apparatus for transcranial stimulation of the endorphin brain structures were introduced into clinical practice. The portable electric device  provides a periodic or continuous stimulation of the  brain structures responsible for producing ingenious endorphins. In many cases the therapeutic effect of the procedure allows to reach up to 80% of reduction in all the withdrawal symptoms, even without additional medications.

4. Ibogaine detox. The unique properties of this alkaloid have allowed many thousands of people to leave drugs for good, when the repeated  attempts to leave the drugs by traditional methods were unsuccessfull. Ibogaine not only cease withdrawal symptoms, but also efficiently blocks craving for opiates. The therapeutic effects of Ibogain have been actively investigated by National Institute on Drug Addiction (NIDA. USA). However, despite the strong results, ibogaine therapy still has not received  the legal status in the United States. Many Americans travel to Mexico, Canada and other coutries to receive Ibogaint reatment. 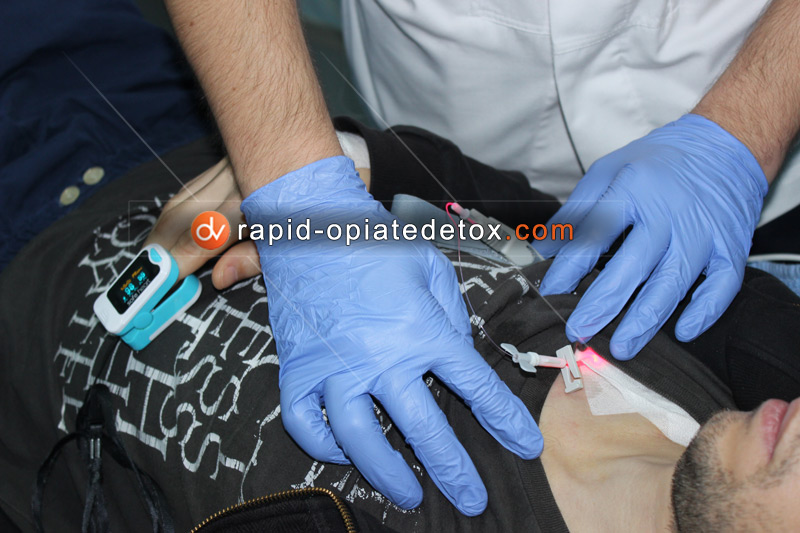 drug detoxification were previously used  in the 80-90-s. Deletion from the biological environment the excess of catecholamines, cytokines, damaging mediators relieves the  withdrawal syndrome.  The drug detoxification methods needed for a specialist, expensive equipment and supplies. Due to these factors, the efferent methods of detoxification were  forced out by more efficient methods and is rarely used nowadays. Though, in case of overdose and poisoning, the methods still demonstrate their effectiveness.

The success of drug detoxification must be confirmed by the control immunochromatic test for the presence of the  opiates in urine sample. The final criterion, stating that the withdrawal syndrome is completed for 100 percents, is a test with opioid antagonist. If, after receiving 50 mg of Naltrexone the patient doesn’t  develop symptoms of withdrawal, we can state  that the physical addiction is successfully overcome. The next step in drug detoxification treatment  is psycho-correction,  normalization of sleep, elimination of craving for drugs, alleviating mood swings, nervousness.

Dr. Alexey: So, for the last four years you were on methadone? Patient: yes. Dr Alexey:...
Rapid detox under anesthesia patient reviews

My name is Carl and I have heroin’s problem for 20 years. Tried going to Portugal, the...
Rapid detox oxycodone UROD procedure patient from Norway

I being doing heroin for 17 years and after today I have made huge breaks through by...
Naltrexone implant clinic europe one year treatment for heroin addiction and detox

Dr. Alexey: Let me make this story a little bit clearer. So, you had problems with heroin...
Marijuana substance cocaine addiction detox